Today the UCI confirmed it was ratifying the USADA finding on Lance Armstrong.
It's a sad day indeed for the cycling community, basically the years between 1997-2005 have been a complete waste of time. People in the sport have made me look a fool, the number of times I've defended cycling against people who think it's a drug ridden sport being competed in by junkies is to many too mention.
The only thing I'm waiting for now is for Lance Armstrong to come out and declare he was a doper and a cheat and is sorry for the millions of people he has let down.
What makes me even madder at myself is the fact that I still want to believe in the man! Everything is pointing to him cheating, the UCI, all his sponsors have left him including Nike and Oakley and not one person as so far backed him up.
Oh well, at least we've got Team Sky. However, if anything ever comes out about them, I will stop following cycling as a sport..... 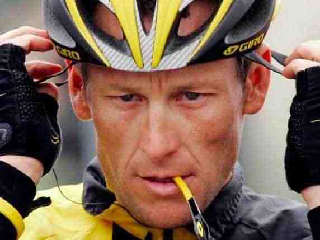 Posted by BangkokRam at 8:03 pm No comments:

This week, the doping scandal that as dogged 7 times Tour de France winner came to a head.

The USADA published a 1000 page report into what mounts to systematic doping during the US Postal days between 1999 & 2006. It can't be good reading for Lance Armstrong. A lot of the report is a re-hash of what as been out there in the public domain already. A lot is made of the testimony of ex team mates, some of these from proven drug cheats, who to be honest are cheats in sport so cheats in life, so I discount their testimony.

However, the killer blow comes from ex team mate and friend George Hencapie. George, whom I've always had a lot of respect for says that at his time at USPS he was part of a massive fraud to get round doping controls.

I'm in a strange place at the second, Lance Armstrong and own suffering and motivation got me out of a very dark place when I was ill back in 2003. His books and DVDs were inspirational, making you forget how ill I was and carry on with life.

His sporting achievements may be in the dock, but his work with his cancer foundation "Livestrong" as been outstanding, I still wear a yellow wristband, when this one breaks I will buy another.

I am prepared to give L A the benefit of the doubt for the moment. If the silver bullet ever turns up and this would mean L A actually admitting he was a cheat, then I will have to think again about my thoughts towards him.


- Posted using BlogPress from my iPad
Posted by BangkokRam at 4:42 pm No comments:

Cycling a year on

I've had my Road bike for a year now and feel like I should comment on what taken up a good bit of my life in this time.

I bought my Boardman Race Team with the governments "Ride to Work" scheme. This scheme allows you to lease a bike for a year and have the cost deducted from your salary, this means you earn less and at the same time pay less tax and NI. So the £1000 cost me roughly £580...

The bike reinvigorated my love of cycling, now when I don't get out on my bike at least once a week I get grouchy. I've met up with several people I've not seen for ages and have been to places I'd forgotten about.

I've ridden approximately 1200 miles this year and can honestly say I've enjoyed nearly all of them.

The Boardman has really stood up well to the task. The only thing I've changed on the bike is the handlebar tape, although the tyres will be ready in a few weeks, but still super happy with the bike.


- Posted using BlogPress from my iPad
Posted by BangkokRam at 9:32 am No comments:

We have all heard about 5 year old April Jones this week. She was abducted from outside her home in Macynlleth in Mid Wales on Monday evening.

There as been a massive search undertaken by locals and police, on Wednesday a local man, Mark Bridger was taken into custody on the charge of conspiracy to kidnap.

Poor April as still not been found and as of yesterday, te police had to release Bridger or charge him.

Sadly he as now been re-arrested on charges suspected murder! We all what this probably means?

My point is, if the police have enough evidence to think Bridger is the culprit then why aren't they using all avenues to get the information out of him and I'm a little ashamed to say, maybe the use of more forceful means to extract info should be used!

I hope they find April soon...

- Posted using BlogPress from my iPad
Posted by BangkokRam at 9:15 am No comments:

The so called priest who hates all things west and would like to see all none Muslims dead by any means, Abu Hamza is still fighting his extradition to the US.
He doesn't want to go to the US, which is pretty understandable, they haven't got the best reputation when it comes to terror suspects.
However, Hamza as tried every single avenue to escape extradition and is using a system he sees as corrupt to help to try and protect him from justice.
He is a very evil man who as a set of beliefs that include murdering innocent people, the sooner he is sent back to the US the better.
- Posted using BlogPress from my iPad

Posted by BangkokRam at 5:31 pm No comments: