I seem to have fallen behind some what on the tablet technology front, I have been quite happy either using my phone, Netbook or PC to access the outside world.

My primary use for the tablet will be to access social media sites including Facebook and Twitter. I use the apps to get on sites such as eBay, Amazon and PayPal. I look at the Internet very rarely, most of my time spent on the BBC site.

The iPad itself is very easy to use, just like having a big phone! You just register it and sign in to iTunes. This is also my biggest bug bear, I can't abide iTunes! I much prefer the android OS. Drag and drop is the future. Also some apps I downloaded for my old iPhone, you cant use them on the iPad, so that's a bit of a rip.

The most positive thing about the tablet is the screen, the sharpness is excellent, the boast of better than eyesight is probably true.

Elizabeth loves it and as picked up like a duck in water. She thinks it is her tablet. Actually, it might as well be! I've just started a new job at work and guess what? The main avenue of reporting is an iPad! So now we have two in the house.

- Posted using BlogPress from my iPad
Posted by BangkokRam at 6:22 pm 1 comment:

Email ThisBlogThis!Share to TwitterShare to FacebookShare to Pinterest
Labels: Technology

I have been with my current employer for only 18 months. It as been an up and down relationship, mostly up.

Recently the opportunity came to move up within the company, it is an a Auditor to our largest customer, going round their sites nationwide and audit the items we supply to them.

Amazingly after a 2 hour interview and a half day doing the actual job with one the guys who already do the job, I was given the position. A nice salary increase, car, phone, laptop and a iPad later, I'm off doing a new job.

Life is going good for a change.
Posted by BangkokRam at 9:28 pm No comments: 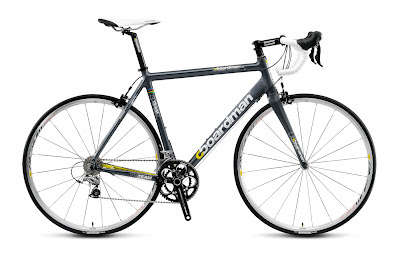 I've had my Boardman Road Team for over 8 months now and feel that I should write a review on this bike.

When I first got the bike, I was staggered by the weight (or the lack of it). Coming in a around 8kg, its the lightest bike I have ever owned. Getting on it first time was akin to be on some sort of performance enhancing drug. Light and responsive and nearly a joy to go uphill.

I did have problems with the bike during the first couple of rides! The bottom bracket made a grinding noise during the first ride, I took it back to Halfords and they corrected it straight away, saying it was a common problem from the factory fit it China. Then the front wheel kept on getting loose spokes and going out of true. This was way past the skill of the Halfords staff, so I had to take it to a proper bike shop to be repaired. Since these problems the performance as been flawless.

The Shimano 105 gears are just what you would expect from Shimano, peform every time, never let you down and have a sweet change. The rear cassette as a 25T big sprocket, because of my fitness, a 27T would have been better. Not a fault of the bike, but me.....

After the initial true up, the wheel set is outstanding and the Vittoria Zaffir tyres have been more than a solid ride. In fact, I've nearly rode the tyres now for 1000 miles and they will be changed in the next few months.

The carbon forks have been very comfy, although I have noticed that the ride can get a little harsh over rough tarmac, but I guess thats aluminium for you.

Handlebars are perfect width and height, the stem is probably 15mm too long for me, but I have gotten used to it and will stick with it.

Email ThisBlogThis!Share to TwitterShare to FacebookShare to Pinterest
Labels: Cycling

It was just over a year ago that Thailand changed Government. From the totally right wing establishment party "The Deomocrats" back to the populist Peau Thai party run by fugitive Thaksin Shinawatra. Well! The party is officially run by his sister Yingluck, but everyone knows who is calling the shots.

It as been a traumatic year with the biggest issue being the floods in December and January, sad to say for Thailand, same old rule came in to being. Protect the rich and flood the poor. From Auyutaya in the north to northern Bangkok the flooding hit like a tsunami in slow motion. The destruction caused was staggering.

On the political front, the old red and yellow confrontation is still taking place, although the yellow shirts are very much in decline, however they refuse to go the whole hogg and die. The red shirts have become inboldent and in some cases been at odds with the Yingluck Government. Graft is same same, maybe worse although a poll of Thai's say they have pretty much excepted it as a way of life.

The problems in the south have continued, just as barbaric and just as covered up from the rest of the world.

Populist policies have included, a Tablet for every school child is being rolled out and a fund to help people buy a new car for first time as gone down well. A new minimum wage as come in to effect, many boss's predicting an economic meltdown.

On the foreign policy side, the Yingluck Government as probably done better than the Democrats, maybe because of the lack of blood on their hands. Relations with Cambodia are alot more peaceful.

So in conclusion, I'll give Yingluck a strong 6/10, it would have been better if she had helped the people more during the floods.
Posted by BangkokRam at 10:17 am No comments:

That time of year again 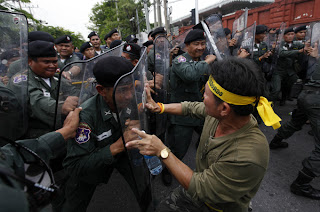 It must be the end of May/start of June, because there is more unrest in Thailand.

This year it's PAD (Peoples Alliance (against) for Democracy)who seem to be aggrieved about something. Namely a Reconciliation bill that is being debated and if passed could see the return of the Fugitive former Prime Minister Thaksin Shinawatra.

PAD have such an hatred for Thaksin, and any Bill that may mean seeing him on Thai soil will be opposed to.

So instead of the usual ways of opposing a block, PAD just surround Parliament and refuse to let any ruling party MP's into the chamber. Simple!

The Thai Police were their usual inept and pathetic body of men, their non confrontational stance emboldens protesters of all persuasion and in the end makes things even worse.

Anyway, these protests are always look good in the international press, gives some people alot to laugh at. 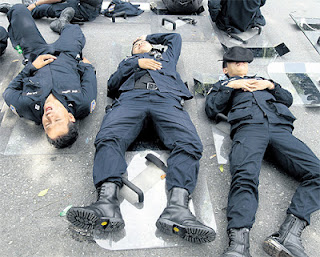 Thai Police take it easy
Posted by BangkokRam at 12:23 pm No comments: