A very qiuet month again, alot happened in Pattaya this month. Sadly all of it very negative. On one of its biggest weekends a demonstration at a goverment summit closed the resort for a few days and a state of emergency was declared. I have frend who was there at the time, he is back this weekend so he'll tell me how it affected them

We have just bought Elizabeth a Vtech digital camara, she loves it and as been taking loads of different pictures. I've picked out the best one's, the rest are blank or of the floor. 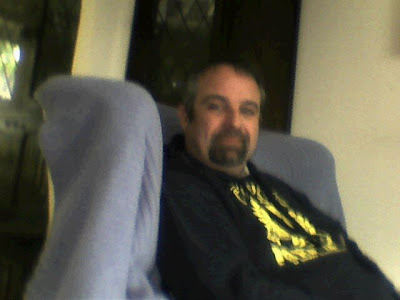 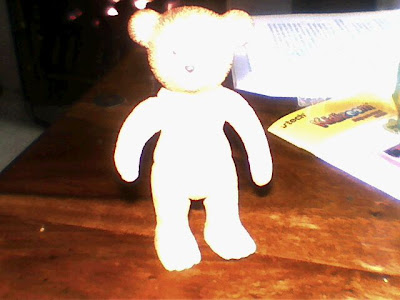 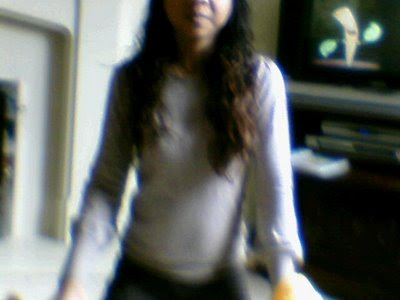 Posted by BangkokRam at 11:39 am No comments:

It seems the time of year when the Thai press bashes fat coppers. Yes they do stand out, but they are still capable of up-holding the Bangkok Police's motto "Rip motorist's off at any occassion".
Here is the story from the Bangkok Post:-
Pol Sen Sgt Maj Chairat Inplalam directs traffic at Saphan Khwai near his Bang Sue police station yesterday. Overweight policemen have been told to shape up. SURAPOL PROMSAKA NA SAKOLNAKORN
His best pal, Chairat Inplalam agrees, ticketing red-light runners is a lot easier than winning the battle of the bulge.
The two officers from Bang Sue police station believe it is too late for overweight men like them to get a flatter tummy.
Following the Metropolitan Police Bureau's recent staff health check, Pol Sen Sgt Maj Samroeng is the most obese city traffic policeman, at 114 kilogrammes, followed by Pol Sen Sgt Maj Chairat who weighs 105 kilogrammes.
Now, it is time for them to shift their thinking because being overweight could put their careers in jeopardy.
The two officers are among about 300 traffic policemen with weight problems who have been given eight weeks to trim down, or see their career paths lead to mundane office jobs.
The scheme is the brainchild of the Bureau's deputy commissioner Panu Kerlappol,
He says he cannot stand the sight of the obese, pot-bellied officers. Being overweight is a health risk and reduces their work performance.
Most importantly, the corpulent officers are an eyesore which contrasts sharply with the popular image of the well-built and dynamic policeman, he said.
The faculty of tropical medicine of Mahidol University conducted health checks for all 4,430 of Bangkok's traffic police between Dec 12, 2008 and Feb 6 this year. They listened to a catalogue of health complaints.
Some 2,500 officers suffer from high levels of cholesterol. Work-related stress, unbalanced diets, and lack of physical exercise contribute to the obesity, the results show.
"Obesity certainly affects their daily work, not to mention their health. Besides, it creates a bad impression of the traffic police," Pol Maj Panu said.
"Nowhere else in the world are traffic officers as overweight as in Thailand. It's time for them to stay in shape and be dynamic."
Under the eight-week weight-loss programme called "Wow Police", chubby officers are put through an exercise regime by trainers at eight branches of the fitness chain California WOW. They have to shed five kilogrammes to pass the test.
The officer who loses the most weight will be rewarded, while those who fail to lose the 5kg minimum will put their jobs in jeopardy.
"If they fail to reduce waist circumference, we have no option but to transfer them to sedentary desk jobs instead of making them vulnerable to health problems from risks associated with lawbreakers resisting arrest," Pol Maj Panu said.
But Pol Sen Sgt Maj Samroeng said being obese is no big deal.
"Obesity has absolutely no effect on me doing my job. Some young traffic policeman don't work as well as I do," Pol Sen Sgt Maj Samroeng said.
Having worked as a traffic policeman for more than 20 years, the thought of sedentary job with a mountain of paperwork makes him cringe. "I don't know if I can make it or not, but I will try my best," he said.
Posted by BangkokRam at 9:49 am No comments: 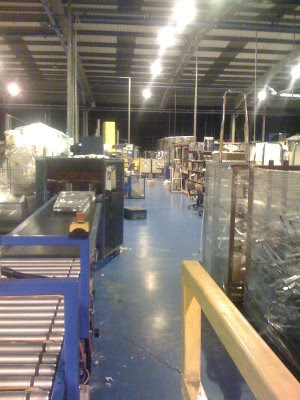 Work is actually killing me! I'm working 12 hour days, 4 days a week. When I say work, I mean non stop apart from two 15 minute breaks and a 30 minute dinner break.
The work is very repeatitive and back breaking, but it is just keeping the wolf from the door and will give us a little bit of spending money for Thailand. 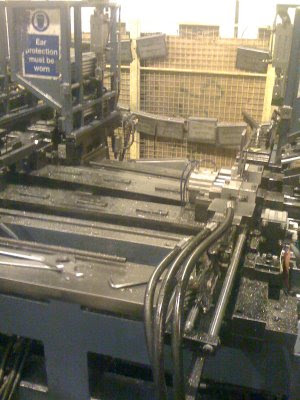 Posted by BangkokRam at 8:14 pm No comments: 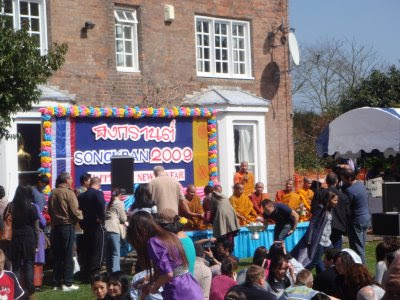 Today we went down to the Thai Temple at Kings Bromley for their version of Songkran.
There were plenty of stalls selling good food and loads of Thai people, Nuch and her friends were in their element.
The weather was georgous and so were the entrants to the Miss Thailand UK. One of Nuch's friends "Nancy" entered the competition. Sadly the competition was a little stiff this year.
We'll be in Thailand soon, so this was like a little taster session. 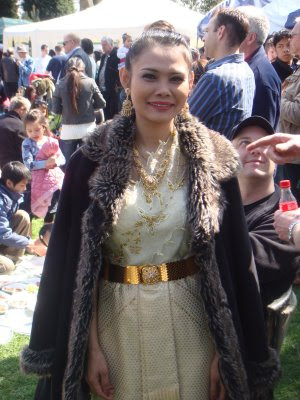 Posted by BangkokRam at 7:59 pm No comments: 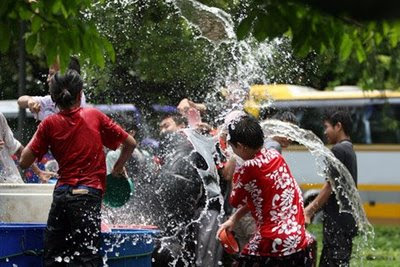 The Thai new year festival of Songkran as begun in earnest. The ceremony revolves around water and basically if you step foot outside your house you'll get a bucket of water thrown at you.
I'm a bit of a stick in the mud, it pisses me off when a complete stranger throws a gallon of water over you, even though you didn't ask for it and are fully clothed! "Cheers" Now all my clothes and wallet are wet through.
The amount of alcohol consumed nearly matches the amount of water thrown and the death count on the road is shocking, i'll report the butchers bill for road deaths later.
I guess at the end of the day its all a bit of fun, but this time next week when water is still being thrown at you!!!!!
Posted by BangkokRam at 2:01 pm No comments: 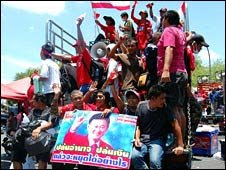 The hard line tactics seem to have worked in Bangkok. The demonstrators have decided to desperse, fearing a blood bath if they enact a final battle at goverment house.
The leaders have been arrested or warrants have been issued, a warrant as has been issued for former PM Thaksin, he hasn't come out of this very well. He had been calling for a revolution on the streets and a coup would mean he would return. All the time he was saying this, his family were leaving the country.
A big argument is brewing because the army didn't crack down on the yellow shirts last year and people want to know why?
The situation isn't going away and like I said, I'll be rewiewing whether we go to Thailand next month.
Posted by BangkokRam at 11:47 am No comments:

Keep your head down 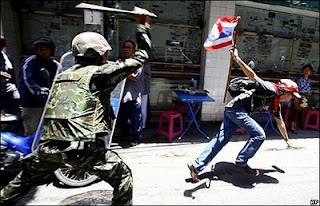 As predicted the problems in Thailand hit new heights today. The army moved in to the Din Dang intersection to remove the red shirt protestors.

Eariler in the day, protestors outside Siam Paragon had comendeered an armoured personnel carrier, this seems to have motivated the army in to action. On the TV, the army can be seen firing in to and over the heads of the red shirt gang. It turned out the army were using training rounds, this must be true because the amount of rounds fired into the crowd would have left 100's dead! 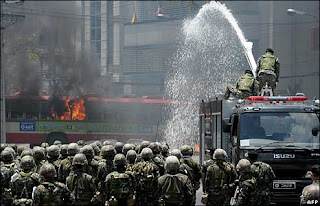 The red shirts tried to drive buses into the army ranks, this really pissed the army off and the gloves came off and by the end of the day something approaching calm had desended on Bangkok. The Red shirts seemed to have moved back to Goverment House which is were their main camp is. A violent day that as made me consider for the first time cancelleing my trip to Thailand next month!
Posted by BangkokRam at 11:35 am No comments: 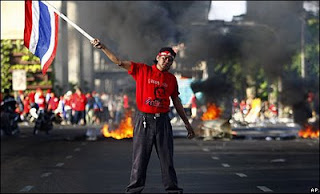 Today the red shirt gang moved back to Bangkok and began disrupting major intersection throughout the city.
A few weeks ago, my sympathy was slightly in favour of the red shirts who are asking for new elections. However they are causing too much trouble and starting something that might end in massive blood shed.
The shopping malls in the centre of the city are a target and the huge intersection near victory monument as apparently got barracades up. In light of the new circumstances, PM Abhisit as declared a state of emergency in Bangkok. This means that the army is now free to enter the fray. It will be interesting to see if the army take part? Last year when the yellow shirt gang disrupted life for everyone the army didn't take any action.
This ain't going to be good!!!!
Posted by BangkokRam at 11:23 am No comments: 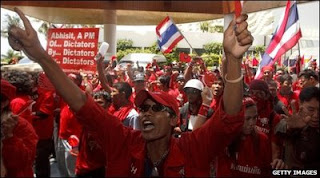 Today, political problems in Thailand reached a new low. ASEAN, which the south east asian version of the EC was due to meet in Pattaya, this is a very prestigious meting to hold for any country.
the Red shirt gang however decided it would use the summit to embarrass the new Thai PM abihsit! This they did when a group a several thousand got into the Hotel and forced the leaders from all the other countries to evacuate from the roof of the building. This is a major set back to Thailand, especially after the airport closure of last year.
PM Abihsit was seriously pissed off and immediately called a state of emergency in Pattaya which lasted for 24 hours.
The demonstrators, having achieved their objective moved back to Bangkok.
Posted by BangkokRam at 6:22 am No comments:

Has part of getting her perminant visa, Nuch took the UK citizenship test today. I've got to admit that it was pretty hard.

The test is 24 questions and you have to get 18 correct. I did the test and got 19 correct. This means i'm british, but only just.

Nuch being Nuch passed, I never had nay doubts. Just the visa to get on May 18th.
Posted by BangkokRam at 11:58 am No comments: