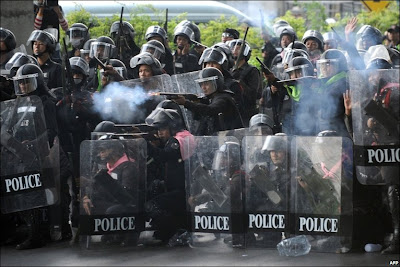 The above picture was taken today about 3km from our house in Thailand!!!

The authorities stopped about 1000 red shirt protestors from attending a demonstration just out side Bangkok. They used rubber bullets at the crowd and fired live rounds over their head. The red shirts in return used stones and petrol bombs.

One soldier was killed in a friendly fire incident and around 80 injured. The Foreign Office as now said that only absolutely neccessary travel to Thailand is advised until the trouble is sorted.....
Posted by BangkokRam at 7:04 pm No comments:

Too close to home

The attack at the Thai Petroleum Pipeline Co (Thappline) fuel depot in Pathum Thani's Lam Luk Ka district occurred about 1.15am.Energy Minister Wannarat Charnnukul said this morning that according to apreliminary police report,a tank containing aviation fuel was set on fireby one of two M79 grenades fired into the Thapline grounds. One failed to explode.

What makes this a worthwhile story to me is the fact it's only a few kilometres from our house in Thailand. To think there are terrorists operating thatclose to home is not funny.....


-- Post From My iPhone
Posted by BangkokRam at 3:55 pm No comments:

Today got even worse for Thailand, the army in the morning recaptured the Thaicom satalite station and took the red shirt TV station off air again.
Then as darkness fell thai time, the army began to clear by force one of the red shirt encampments. Unfortunately the red shirts were in no mood to give ground. In the ensuing battle two soldiers, eight red shirts and a Japanese journalist have been killed and over 500 injured.
The army have since retreated and we can only wait to see what tomorrow brings.
Also the dispute as interacted with the foreign tourist community, Khao San Road which is a famous back packer haunt was one of the sites of violence. Reports are in of a Japanese tourist wearing a red shirt being attacked by soldiers. I hope this is the last of the violence for Thailands sake.

-- Post From My iPhone
Posted by BangkokRam at 7:22 pm No comments:

When will it end?

Today in Thailand saw the first action between the red shirts and the Thai authorities. The Thaicom satalite depot, (which is too close for comfort to our house in Patum Thani) was taken over by the red shirts. The army it seems tried to stop them but the numbers were to great.
The red shirts were pissed off that their TV station had been switched off. Because of their actions today the TV station is back up and running, this as certainly emboldened the red shirts and made the army look weak.
In further news today, the goverment as warned foreign tourists to take care if they come upon any red shirt protests! All seems a little strange as most correspondents have said how good natured the red shirts have been to tourists.
I'll try to keep this blog updated as and when things happen in Thailand

-- Post From My iPhone
Posted by BangkokRam at 10:19 pm No comments: 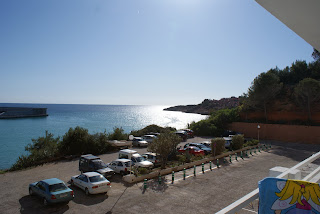 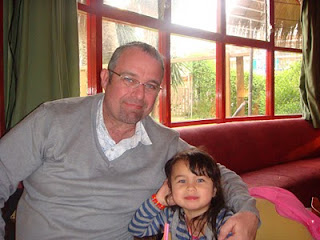 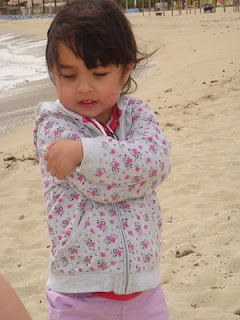 It's been over five years since i've been to Mallorca. This is one of my favourite european destinations. On this trip I took Elizabeth and my mate Gary came with Emily, his 4 year old daughter.
We flew from Birmingham with Ryan Air, I can only say, you get whet you pay for. Next time I will look at what non budget airlines are offering.
We stayed at a friends apartment in El Toro about 6km from Magalluf. Most days we went down to MAgalluf. The beach was very nice and the girls loved playing on there all day.
Now the Euro is nearly 1 to 1 with the pound, everything is more expensive! In Magalluf you can buy cheap alcahol and british pub grub, but if you want anything up market, you will pay for it.
At the end of the day, it was a great 5 day break and I can't wait to take Nuch later in the year.
Posted by BangkokRam at 8:45 pm 1 comment: