My take on Lance Armstrong 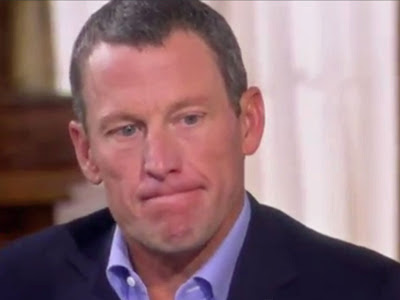 This week, my cycling hero fessed up to have been a cheat.

This as been news for the last six months. Ever since LA (Lance Armstrong) decided not to cooperate with an USADA inquiry, everyone thought the worse. I decided to give this bloke the benefit of the doubt.

In 2002/3, I myself was very ill. All the time I thought if LA can come back from cancer then I should be able to get back to the level of performance that I was at several years earlier. Lets put things in to some perspective. LA is a Premiership team like Man Utd, in comparison I would be playing in the Unibond League for Belper Town.

Unfortunately, I was and have never been able to get close and this at times as made me mad with myself. I just couldn't commit to the level of dedication that LA showed in his books and DVDs. ( Which I own, but thats another story).

However, after the interview the other night with Oprah Winfrey in which LA partially came clean and admitted doping, a few things dawned on.

These are the parts of the LA recovery that I didnt complete:

Be part of the largest ever doping circle in the history of pro sport
Take Human Growth Ormones
Take EPO
Take Steroids
Have complete blood transfusions
Have the backing of $100,000,00's of sponsors funds
Manipulate people close to me to my advantage

Maybe, just maybe if I Had been able to have a part of these cheats, then who knows. Maybe I could have been a contender?

In short, LA totally disgusts me, Jail will be to good for him. The very least he needs to do is apologise to all the people he abused, tell the full story of his doping history and then give all the money he gained during the doping era needs to be either given back or given to the Lvestrong Foundation.

Never been let down like this before.......
Posted by BangkokRam at 7:41 pm No comments:

For a year now I've been struggling with putting posts up on this blog.

I've used excuses like time, not much going on in my life, nothing going on in the world etc etc...

After a long think, I believe the main reason is the new and growing social media craze. Blogging was my first venture in to this world and before the likes of Facebook and Twitter came on the scene blogging was the best way to get your message over to the rest of the world, or any one who was bothered to look at it.

I've posted nearly 800 times and some of the blogs if I say so myself have been good and attracted a lot of attention. However, I reach more people and the people I want to reach with Facebook, the whole experience is easier and you can get your message over in fewer words and the use of photos makes things way brighter.

So I've had a bit of think and my blog in its current form will be coming to and end. This is not the end of my blogging days, this blog started off has a blog about my life in Thailand. Thailand is still close to my heart and thoughts. So, I'm going to concentrate on all things Thailand, be it travelling, Thailand blogs, Expat life seen through my experiences and people who live there and Thai life.

Over the next dew weeks, I'm going to archive the old blog and bring the blog up to date. The name will stay the same and the ,ink through my own website will also remain, I will also notify people on my Facebook and twitter accounts.

Below are links to myself

- Posted using BlogPress from my iPad
Posted by BangkokRam at 9:52 pm No comments: