This will probably be my only post about the 2014 World Cup.
The main reason is the absolutely dyer performance of the England Team, in short they have been shocking, even more worse than the usual effort. Luckily Spain got knocked out before us so we weren't the first to get knocked out.
We played Italy in the first game, the pundits all said that we played well and were unlucky not to get a draw, I went along with this. I shouldn't, we lost.
We had to win the second game against Uruquay, they lost in their first match against Costa Rica. Apparently, Uruquays talisman "Luis Suarez" wasn't 100% fit! as it turned out he wasn't! but he still managed to run circles around our woeful defence and win 2-1. So putting us out of the tournament.
Too make matters worse, we now face Costa Rica who only went and stuffed Italy in the other game. I'm dreading the game and probably won't watch it, the first time I remember not watching England at a World Cup.
Apparently it's nobody's fault, certainly not the players, some of them came out on social media and apologised for their performance, sorry lads, it didn't make me feel better. Classic crocodile tears. The pundits, particularly some of the ex-pros have backed them to the hilt, "time to build for the future"! Jesus holy Christ, I've heard that so many times, I'm beginning to think the scripts have already been written for Euro 2016.
Stuart Pearce seems to be the only one to talk sense, we need to bring the under 21 team through as a team, not play the young premier stars if they have a good half season in the prem. a statistic he gave out was that from the squad he took to the Euro 08 under 21 final against Germany, Germany had 6 players alone in the starting 11 of their team in their first match, we had 2 players in the whole squad. What happened to the other 21 players?
Ok, now is the time to fix things.
Short term, start to pick the best players in the country, don't leave the best left full back and centre back at home, don't play people for who they are star wise.
Make anyone who wants to play for England sign up to it, country first, club second. This may mean not getting paid by their club when on international duty, only get the £11000 per game from the FA.
If they're not happy, not getting the money, then they don't play for their country. Simple....
The FA need to grow a back bone, face up to the Premier League, give clubs incentives to sign English talent, put a cap on salaries, if the Premiership can't except this, stop them from entering any FA sanctioned cups, FA Cup, Champions League, put the Chapion sides through, see how long the Prem clubs go without any money from those competitions. I do blame the Premier League for the current impasse with the national side.
Long term, I would like to see the FA get the best 50 14 yr olds in the country and form a national squad, this may mean them being released by their club. Again, if you want to play for the national side, you're going to do things our way. These young lads can then concentrate on playing as a team, fight for their place. When they are 18 auction them off to a championship or league team, not the premiership. The club can then pay their wages, but all the time, the national team comes first. If any of them want to play in the Prem, then they can, but they will forfeit their England place. When they are 26, then let them go to the Prem, let them earn the super big money.
Each year, take the best 50 players, maybe guarantee the club they came from the first choice when they go to clubs.
I believe this will work, it'll take 10 years even if we start today, but we've got to do something. 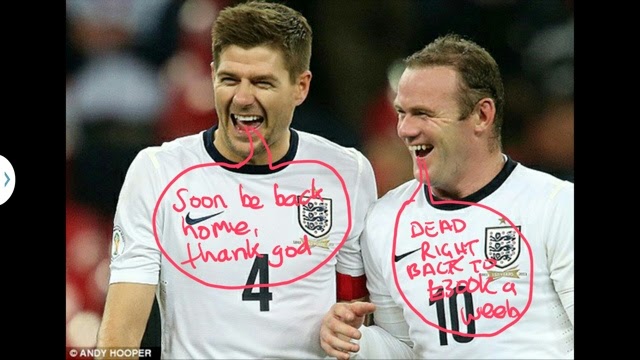 Posted by BangkokRam at 9:51 pm No comments:

After 8 years, Thailand is in the grip of yet another coup. It was bound to happen!

A different set of elites were getting on top of the old elites. The old elites called on their good mates the army and there you go, Coup 101.

It's very different this time, there have been protests in the country and the army as responded quite harshly. Cracking straight down on protesters, shutting down social media for an hour or so (which didn't go down well), closing off mass transit points and people seem to be disappearing to hardiness camps for a week or so. Amazingly coming out happy.

Obviously, none of the old elite trouble makers are in trouble even though they started the last bout of trouble. No sir....

Even the Americans who are usually troubled by allied coups are voicing decent. The UK as usual haven't said very much, standard for a British government.

So the circle of Thai political life goes on, Coup - return to democracy - wrong party gets into power for old elite - old elite protest - coup..... 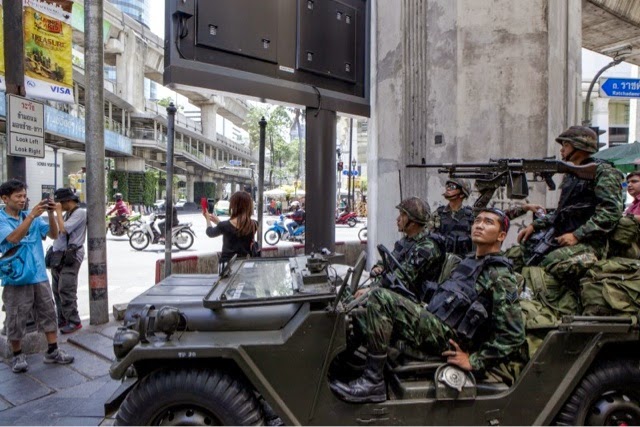