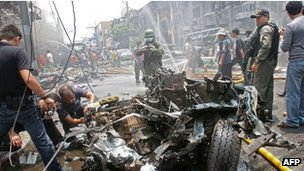 This is my 750th post on this blog. Sadly its more of the same with multipe bombing in Southern Thailand.

Around noon time in Yala, two motorbike and on car bomb went off within a few hundred metres of each. In classic terrorist fashion, the first bomb went off and drew people to help with the wounded, then the other two went off catching even more people in the blasts.

Latest reports say eleven people have been murdered and over 100 injured, many seriously.

The second bomd exploded in the basement car park of an hotel in Hat Yai, at first it was thought that it was an explosion caused by leaking gas. Unfortunately, a crater has been found where the bomb was placed. This bomb killed five with over 300 injured. Amongst the dead are three Malay tourists. The Thai authorities aren't to worried about natives, but when tourists die they hope and pray no one finds out.

Luckily the rest of the world seems fairly uninterested in what happens in Southern Thailand, despite the deaths of 5000 people since 2004.

On the BBC website, it was still only reporting the deaths of 7 people in Yala, nothing about the Hat Yai bombing.
Posted by BangkokRam at 6:33 pm No comments:

Today in Bangkok, the inventor and founder of Red Bull died. Chaleo Yoovidhya (89) passed away in Hospital.

He was a self made billionaire, who reportedly earnt Bht11M a day and was worth $5bn.

Red Bull began life in 1976 under the name of "Krating Daeng" which means "Red Gaur" Gaur being an Ox like creature found on the Thai-Cambodian border. When in 1986 he went in to partnership with Austrian, Dietrich Matechitz the drink went international, The brand became "Red Bull"

The Red Bull in Thailand is a very different concocsion than the carbonated verion we are used to in the west, it is a very sweet, stick solution and comes in a small brown medicine bottle. You do recognise the taste and smell.

If a person ever left a legacy to the world then Chaleo Yoovidhya trumps most people.
Posted by BangkokRam at 10:28 pm No comments: