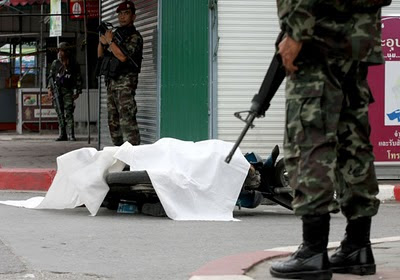 SECURITY OFFICIALS Monday guard the scene where Sgt-Major 1st Class Banchob Inchan, from the Internal Security Operations Command Region 4, was killed. He was shot dead while riding his motorbike on Sirorod Road in Yala’s Muang district to work at Sirindhorn Military Camp in Pattani’s Yarang district.
The problems in the four southern districts of Thailand have been going on now for over seven years in its current state.
In that time nearly four thousand people have lost there lives, all the goverment and military junta's have tried to solve the problem, but on the face of it have at best, made the situation no worse. The main culprits are said to be Muslim insurgents, the south of Thailand is prodominently Muslim. However no one knows any names or even organistions that are involved. The problem started when Thailand annexed the states from Malaysia at the end of the second world war, and one presumes that the goal of the insurgents is to be re-united with the Muslim Malay goverment.
Unfortunately, the killings and assisnations bear little resemblance of a freedom fight. It is speculated that amongst the insurgent killing, other problems like honour killings, criminal gangs and ethnic killings are being carried out and passed off as terror acts.
The goverment as tried hard ball tatics and then the softly softly approach, neither seem to get any where and how can you hold talks with people who you don't know?
Whilst the troubles have only touched a few westerners, it must be remembered that the popular islands of Phucket and Koh Samui are not that far away, hopefully the insurgents don't get any crazy ideas to expand their operations. It seems strange that up until now they haven't, again making the whole thing very strange.
I can't see any end to this problem and hopefully it never comes to visit the tourist areas, the last thing Thailand needs at the moment. For the people of the area, I only hope a solution can be found and they can stop looking over their shoulders all the time.
Posted by BangkokRam at 10:12 am