One of the reasons for the illegal military coup last year was the then goverments not too hot record dealing with the troubled south.

In the southern five states of Thailand there as been an insurgency by Muslim extremists who want to be part of Malaysia, into the mix had organised crimes and plenty of inter village vendetta and you have nearly 3000 deaths in four years.

The Junta doesn't seem to have coped any better than the previous goverment, only today a army informer was disembowelled, shot and then crucified with a warning tape to him warning others not to turn supergrass. Later that night two Buddhist were shot and be-headed by insurgents for being nothing more than of the wrong religion.

I have no axe to grind either way, but from the outside the south does seem to get a raw deal from the central goverment and over heavy handed tatics by goverments aren't working. I hope it doesn't spread because not too far away are the resort islands of Phucket and Koh Samui, any attack on these tourist traps would deal a serious blow to the thai economy.
Posted by BangkokRam at 1:49 pm No comments:

Jewel in the Crown 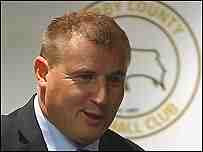 It as been annouced today that Paul Jewell is the new Boss of the Rams. I think this is a positive step, he is proven in the Prem and as a good record of great escapes. Also he is teaming up with his old No. 2 Chris Hutchins, who also as alot of experience.
So come on rams, lets see some results from now on. Lets start with a win against the Mackams on saturday.
Posted by BangkokRam at 2:09 pm No comments: 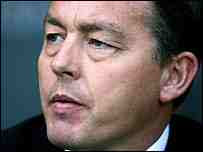 The news that I had been waiting for happened today. Billy davies was fired as Manager of the Rams, this i'm not upset about!
Yes, he got us into the Premiership. After that he as done nothing that as had a positive effect on Derby. The players he as bought have genrally not performed, Earnshaw hardly performing at all. A 33 goal concede and only 1 win in the Prem can only mean one thing? The Bullet, this as been duly fired and Billy as taken in on the chin together with a £3/4m pay off.
Who next?
Three names are:
Steve McClaren (Please no)
Paul Jewel (Uuummm? Could be)
Paul Ince (Possibility)
We'll see.
Posted by BangkokRam at 2:02 pm No comments: 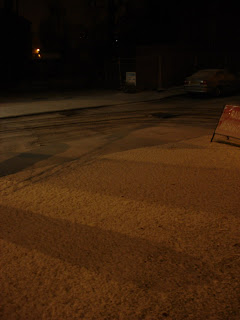 This afternoon and all night we had the first snow of this winter, unuasually early if you ask me!
This is the first snow that Nuch as ever seen and she was very excited, I took Elizabeth and Nuch outside into the snow. Elizabeth took it in her usual matter of fact way she excepts everything in life. Nuch began thinking about her early morning walk to work which suddenly took on a "Scott of the Antartic" feel.
Luckily by morning most of the snow had gone.
Posted by BangkokRam at 6:55 pm No comments: 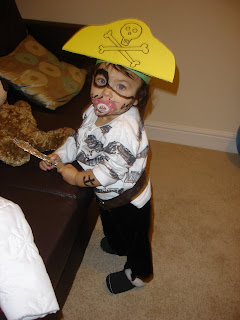 I have to be honest, Children in Need on the BBC as always passed me by. This year Elizabeth's Nursery is having a fund raising day zzzzzzzz!
They have asked for all the children to go in fancy dress with the enthasis on making the costumes yourself. I decided to send Elizabeh as a Pirate, complete with hat, sword, belt, tatto and face paint. She seemed to be enjoying herself and loved the sword. God help some of the kids at Nursery.
They are having a few activities tonight, including a raffle with a Rams shirt. I think i'll win that.
Posted by BangkokRam at 9:51 am No comments: 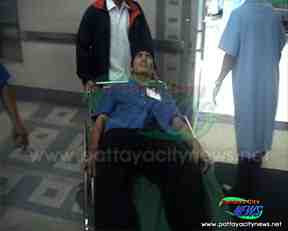 "I only said he was a shite Sparky"
In the UK when you have a disagreement with employer or a fellow employee; there are certain recourses. Your Manager, Foreman or your Union Rep. Failing all this and especially with Psyhco nutters, you have too go through the courts.
In Thailand things can get different! I found this story on Pattaya City News about a fall out between an Hotel emplyee and a Hotel technician. Basically the employee had asked the Technician to do a job in a Hotel. The Jontiam Beach Resort, which we have stayed in at Pattaya. the Tech obviously was too busy and gave him some sort of finger. The Hotel employee then must have given him a dressing down, which is a big mistake. Never cause a Thai to loose face or as happened in this case, retribution can be painful.
Later that night said Hotel employee was having a cheeky beer after work and a gang of moped riders went past with the Techie on one of the bikes, a few minutes later they rode past agisn, opening fire with shotguns and handguns! Employee and mate were both hit, one in the stomach. Both will make a full recovery, but how they handle disputes in the future will change.
Police are currently searching for said Techie, he probobly want get charged, more likely a bribe, a bit of blood money and a good old fashioned police kicking. Now thats justice done the right way.
Posted by BangkokRam at 5:04 pm No comments: 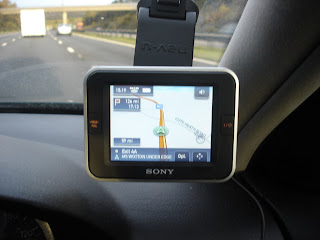 In my job, the use of a Sat Nav is a must. Whilst I know my way to most cities in the Gt. Britian, once you get there you have to either rely on a basic set of directions from the customer or a dodgy set off the internet. These you have to read as you drive, so not to safe.
Sat Nav as made things alot easier, providing you do a few simple things;
Basically, a tool of my trade.
Posted by BangkokRam at 8:24 pm No comments:

Back on the treader 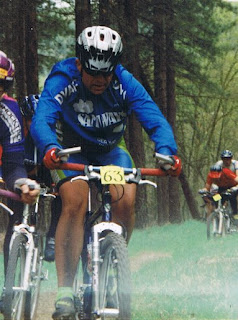 This time its for real, i'm going to get fit!
After a recent visit to the Doctors, she left me with a few real choices to make. Get fit and watch my daughter grow up or don't get fit and?????
So i'm altering my diet, sticking to what the Doc says, going to Hospital for tests when i'm told and more importantly; get back on my bike!
I've set myself a target of being fit enough to race in the first event of the Notts & Derby Cyclo Cross League in September 2008 (Looking like the picture of me only ten years ago). I went out today and did a steady eighteen miles, next week i'll double that.
Posted by BangkokRam at 6:46 pm No comments:

Thai Home gets broken into! 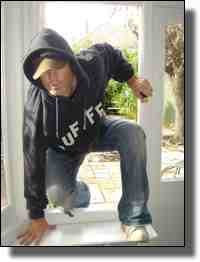 We heard this afternoon that our house in Thailand had been broken into. Nuch's Dad gave us a call with the good news.
Nuch's family use the house at the weekend, which is great as they can see any problems like this fairly sharphish. It was obviously a one man band as he had left big stuff like the PC, TV and thank god my golf clubs.
He had taken the DVD player which was cheap anyway and rattled when played, my iPod, which again is no great shakes too me. He had also taken several Bhudda images that Nuch's Grandma had given us. These in particular have made Nuch very unhappy. Luckily my handgun, knife, CSGas and night stick were left alone, this is good because should I ever find out who it was i'll gas them, beat them, stab them and then shoot them. The Boys in Brown will probably pat me on the back for services too the community.
Thailand is being plagued at the moment by break ins, this like the UK is probably drug fuelled. Despite its strict anti drug laws, Thai teens regually flaunt the law to get hold of Yabba, a sort of E for the masses.
The house as been secured and this as prompted our decision to rent the house out and get a bit of income back.
Posted by BangkokRam at 6:07 pm No comments:

Like the BBC and many other media outlets, Interactive is the new buzz word. Not to be out done i've added a poll at the side in yellow. I will change every fortnight or so.

Also i've added a messeage board, you can put a message on the board, if i'm about i'll answer straight away or if there is someone else out there looking at the same time, they'll maybe spark up a conversation with you.
Posted by BangkokRam at 8:00 pm No comments: 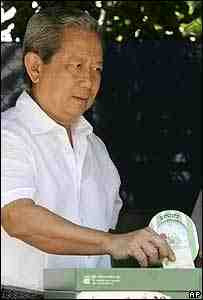 Whats been happening in Thailand over the last three months? Well it seems not too much.

Thailand is still on par with goverments like Burma and Pakistan as far as democracy goes. The publis voted for a new constitution, more out of "Lets get over this" mood than anything else. General Sonthi the coup leader as resigned as army cheif. You can bet your bottom dollar he'll run in the elections when ever they are.
Thailand kept its head down when there was all the unrest in Burma. Hoping not to draw anyones attention to the fact Thailand is a military dictatorship.
The King who celebrates his 80th birthday later this year as been very unwell, hopefully he gets well soon and leads the country in celebrations.
The most important thing though, is the success of Man City. Thaksin's master stroke of taking over a premiership side is a stroke of genius. The Thai courts want him back in the country. They need to be careful, they may get what they wish for. 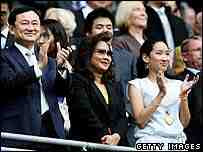 From the expats i've spoke to, the dollar exchange rate is hitting hard, not so many vistors from the states. The pubs are still go going and a slight relaxation of the closing times. I'm looking forward to getting back over in feb/march next year.
Posted by BangkokRam at 8:39 pm No comments:

After three months out of the system, dealing with a new job, two moves and a physco ex-Boss. I'm finally getting down to re-posting.

I have loads of posts in the offoing and also a new address for the site. I'll put the posts on as they happened and when I catch up i'll delete this post.

All the best for everyone who as been in touch. 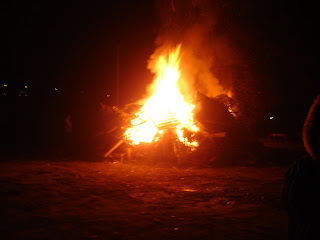 Well not quite, I took Elizabeth too see her first Guy Fawkes Night display. It was bitter cold and blinkin' dark. 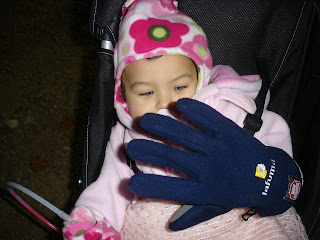 Once the fire got going, the place soon warmed up. Elizabeth loved the fire, she ust stared at it in wonder. The fireworks didn't have the same effect because she was tired out. I've included a couple of pictures for you. 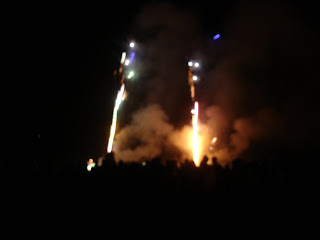 Posted by BangkokRam at 10:16 pm No comments: 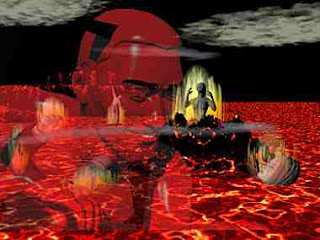 The picture above is my version of IKEA, basically Hell!
Too many people, not enough parking! Some good bargains and alot of crap you don't need but still buy.
One good thing, the meatballs are pretty tasty.
Posted by BangkokRam at 4:05 pm No comments: