My favourite and I think the best website in Thailand as shut its doors, and it would seem for good.
Mangosauce was written by an English guy called David, his style of writing is unique and one I wish I could get something like close too. If you look back through the archives, the stories are so funny, even now! I regulary look back when I need cheering up.
Many reasons have been banded about, the toughning up of the Thai Thought Police and a well known American internet stalker who goes round having a go at blogs which he as a personal gripe against. I can't mention who it is because he'll probaly start on me next. I don't need the hassle. However the main reason for the closure is the real world catching up with David and after a spat with Google his advertising revenue dried up and he as had to find a real job.
Hopefully in the future, David as a change of mind and starts Mangosauce going again, there is definately a gap in the Ex Pat web world now in Thailand.
Posted by BangkokRam at 4:25 pm No comments: 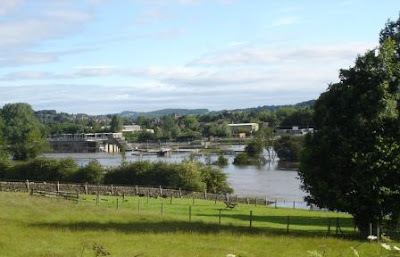 What the hell is going on with the weather in the UK? Will it ever stop raining. At least in Thailand you can predict what time the rain will start and how long it will last for!
For nearly two solid weeks it as rained, and in some parts have had a 1/5th of the years rainfall in one day!
This time of year I expect the weather in the UK to be nearing BBQ weather, but then again it is time for Wimbledon.
Posted by BangkokRam at 3:42 pm No comments: 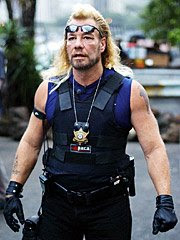 Dog the Bounty Hunter is what multi channeled digital TV was made for. It is basically a reality TV series about an american bounty hunter called Duane "Dog" Chapman and his family, who charge about rounding up errant US crims.
Sadly Dog looks a complete Tosser, he must be well over 50 and wears indian brades in his hair and as extensions to the back of his hair. He wears Oakley Thumper MP3 glasses, these glasses are so naff, Oakley can't give them away. He as a real scary wife who is a size 22 with a suicide blond hair do.
In the last series he got a real ass kicking, the latest series is about his comeback. To make matters worse, Dog is an ex crim himself who is now a born again christian. The poor sods he catches get a full lecture from this guy.

"PRICK"
Posted by BangkokRam at 9:24 pm No comments:

Email ThisBlogThis!Share to TwitterShare to FacebookShare to Pinterest
Labels: TV 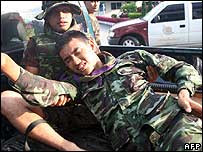 Like I said in my last post I really want to make positive statements about Thailand, but until something positive comes out of the country then it'll be bad news as usual.
The other day eleven soldiers were killed in a roadside bomb attack, similar to the IRD's in Iraq, this is the single loss of military life for a couple of years. The muslim insurgents are getting more and more sophisticated, maybe being trained out of country, plus there are strong rumours that a company of Jamilia Islamia from Indonesia is operating in the area.
In a seperate incident a few miles away, six muslims were gunned down asy left a mosque, the Junta as blamed the insurgents for killing teir own to stir up hatred, the Muslim community blames the Junta, I feel that this attack was probaly carried out by Buddhist vigilanties carried out the attack.
I don't know where all this is going or how much worse it can get, but from an outsider looking in, the Junta needs to get their act together, maybe:

What do I Know?

Posted by BangkokRam at 9:21 am No comments: