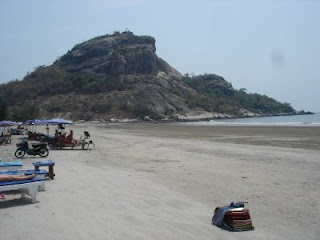 Hua Hin is one of my favourite resorts in Thailand, only 250km away from Bangkok and some of the best beaches out. 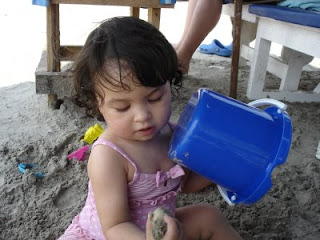 We go about 5km south of the resort to Takiat Beach, the beach is long and the tide is out before you get up. One of the main reasons for going to Hua Hin was relaxation, sadly this didn't materailise! Thai's don't like just lying on the loungers, reading and having a beer. They always need to be on the go, and this included me. The trip however was more than made up for by Elizabeth's reaction to the sea and beach. SHE LOVED IT!!!!!!
She actually ran from the deck ckairs straight into the sea, she was a monster, hurling herself into the sea and choking when trying to breathe under water. When it came time to get her out then she got all pazzed up. She played in the sand with a bucket and spade set we bought her and loved the swimming pool. 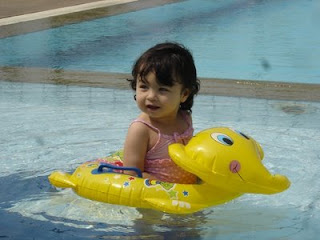 The three day break was over all to quickly and it was back to Bangkok and home. Next time I think a week will be in order when we go to the coast.
Posted by BangkokRam at 10:37 am No comments: 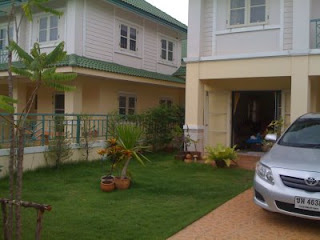 After over a year away from the house, I was glad to get back there. As I stated in the previous blog, Nuch's parents did a superb job of looking after the place. 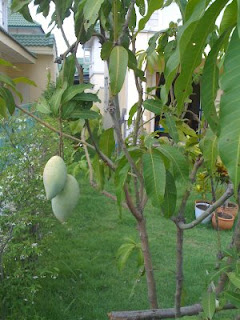 In the garden we had many new plants including a mango tree, later in the week we ate the mango's with some sticky rice "lovely". 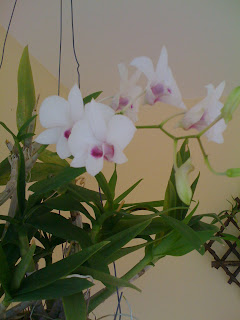 The orchids I tried my best to kill had been bought back to life and the grass had been freshly cut.
So a big thanks to Nuch's Mum and Dad.
Posted by BangkokRam at 3:51 pm No comments: 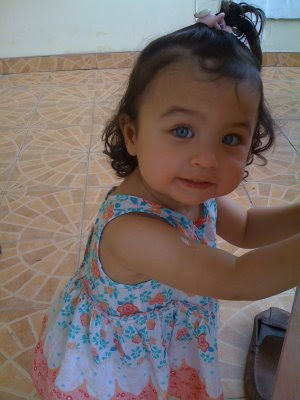 After a well earnt rest and a nice breakfast we left the hotel and went back to our house.

I was really looking forward to seeing the house again. Nuch's parents had done a fantastic job of looking after it. Nuch and i then went to do some banking and a shop. It was good to get back to daily Thai life, it also bought back alot of comparisons between Thailand and the UK.

The supermarket is case in part, as well as showing up the different products that each country sells, it also showed up the price that we pay. Believe it or not, the UK isn't always more expensive. We bought Elazabeth some nappies, these were more expensive and bearing in mind I always use the 3 - 1 ratio. Meaning people in thailand at a minimum earn three times less than we do, items that are three times less on ratio are the same price to average Joe in the UK. So nappies costing more in Thailand really cost three times as much as the UK. Baby milk is the same price, there aren't many own brand products and the choice in the aisles is limited. Some products are better priced, or should I say anything made in china is a top price.

In the evening we had a nice meal at one of my favourite restaurants and went home. Elizabeth is struggling with her Grandad, which is a real shame. He loves her too bits, but she is having none of it, especially if i'm about. I have too leave the room and listen to her crying for me until she looses interest. Not something i'm pleased with. Oh well, Hua Hin on wednesday.
Posted by BangkokRam at 1:30 pm No comments:

Yesterday we travelled down to London and stayed the night at the Holiday Inn near the airport, it was a pretty easy journey down. We had to turn back after a few miles because Nuch had forgotten her purse, then about fifty miles down I realised we had forgot the pushchair which would prove to be a real pain in more ways than one!

We settled into the Hotel, unfortunately Elizabeth could sense that something was happening and it took her till midnight to get to sleep, bearing in mind we had to be up 4.30am. We were nicely ripped off by the Limo driver to the airport, remember to agree the price first or you'll get ripped off by one of our eastern european cousins!

Heathrow was ok, we were soon on the plane, we were flying with Gulf Air via Bahrain, Elizabeth could have been better behaved, but what can you expect. We landed at Bahrain, we should have had a two hour turnaround, we looked in duty free had a Mcdonalds and went to catch the flight. You guessed it a four hour delay, no explanation for the masses. We tried to settle down, however Nuch was on edge because her parents were meeting us, she had visions of them waiting four hours. Elizabeth decided it was time to become the devil child, which really wound Nuch up. We got to boarding, then a further hour delay was annouced!!!!!

We finally got on the plane, luckily Elizabeth settled down for mose of the journey and Nuch and I had chance for a breather.

On arrival at Bangkok we went through Immigration, got our cases very quickly and went in search of Nuch's parents and the hire car. We found them and I was amazed at how relaxed everyone was even though their daughter had been away for a year, oh well, must be a Thai thing.

We picked up a brand new Toyota Altis and off we went to the outlaws via the Hotel we were staying in for the night. Nuch's family were more interested in Elizabeth, we had one and a half cases full of clothes and presents for them, eventually we went back to the Hotel for a rest. Elizabeth settled down straight away. In the evening we met up with two of Nuch's workmates, they did seem a little emotional. We ate at Sizzler which is one of my favourites then after another short trip back to the outlaws it was back to the Hotel for a well earn't rest.
Posted by BangkokRam at 5:59 pm No comments:

Actually getting round to writing a post this year, sorry about that.

So far this year everything as gone fairly smoothly, my new job is going well although its hard bloody work. As most of you know that isn't what I do!

Elizabeth is growing so fast, she is walking and is starting to make basic words like Daddy and cat, she wont say Mummy, just too annoy Nuch.

Nuch is fine, the job is keeping her busy. She is also turning out to be a perfect wife, looks like i've done something right for a change.

Whilst were over there, Phil will be there aswell as Huddersfield Dave and maybe a couple of others. So its going to get a bit mad.

Antway, i'll try to update the blog with stuff that as happened between now and new year.
Posted by BangkokRam at 8:23 pm No comments: