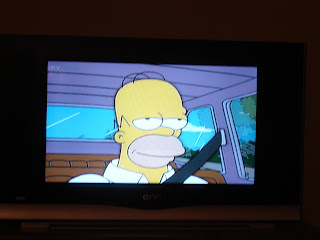 Today was my birthday, in all fairness it was pretty boring.
Wer'e a bit skint at the moment, just cards this year. The worst thing is my likeness becoming more and more like Homer Simpson. I know I have a little bit more hair and my skin isn't yellow. However from then on the likeness gets uncanny!
Could be worse, I could look like Derek or TGB from Hull!!!!!
Posted by BangkokRam at 2:22 pm No comments: 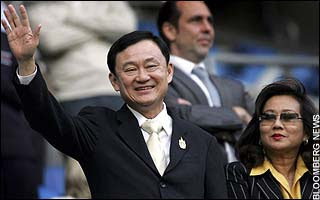 Thaksin and wife at Man City
Today, ex Thailand PM Thaksin Shinawatra says he is not going to go back to Thailand to answer the corruption charges laid against him by the Thai military junta. He as hired a top lawyer firm in the UK (Wont be cheap) to fight extradition.
He says he as no charges to answer to and these are only political motivated accusations. He may be right, I wouldn't have thought the junta would like to close an inspection into some of their affairs!
Also Thaksin is the hero of Man City fans at the moment, two wins out of two promotes him to demi-god. I also believe that the UK goverment is unlikely to send him back on political charges especially being as Thailand is ruled by a military junta and is not democratic.
Posted by BangkokRam at 7:22 pm No comments:

It didn't take too long, in fact I was offered the job last friday. There were just a few things to iron out with regards to the package and away you go.

I'm getting back into the Power transmission side of things, its what i've done for the last fourteen out of eighteen years, getting back to something I enjoy.

I cant wait to get started, Gardening leave is becoming a bit of a drag, now all i've got to do is find a place to live. I'll post more news when I get it. Unfortunately i'm going to have to change my mobile number again which is becoming a real pain in the ass.
Posted by BangkokRam at 1:05 pm 1 comment:

Its all well and good being on gardening time between jobs, but i'm having to put up with some of the really sad shows that Nuch watches on TV.

In Thailand daytime TV consists of hidious soap shows, very bad copies of western game shows and variety shows that have too be seen to be believed. So shows like Jerry Springer, Jeremy Kyle and The Trisha Show are a reverlation to Nuch.

These shows show the the very worst that humanity as to offer the world. The scum of the world who fancy their fifteen minutes get their mugs on the idiot box and make the rest of us feel better about ourselves.

The Jerry Springer show is quite funny! Its also set in the US, which means you can laugh at the stupid trailer trash yanks. The Jeremy Kyle Show and Trisha Show are british and show the worst of the Chav britian as too offer. They wind me up so bad, I want too put my boot through the TV. So take my advice and never watch these programs, there is nothing to gain by it.
Posted by BangkokRam at 9:46 am No comments:

Email ThisBlogThis!Share to TwitterShare to FacebookShare to Pinterest
Labels: TV

Its been a fair few weeks since I posted any news or pictures of Elizabeth.
She is growing so fast, she as mastered crawling and is now climbing up furniture to stand up. I've had to lower the cot so she doesn't climb out. With this new found freedom comes the need to say "NO" to her, obviously she totally ignores both Nuch and I!
This as bought about an age old question, smack or not smack? So far i've only tap her on her hand after she tried to play with fake coal from the gas fire, she sort of looked at me as if she knew that this wasn't normal for me to do. I don't think I will be able to go any further than this.
I think she still looks super cute, but then again i'm bias.
Posted by BangkokRam at 2:57 pm No comments: 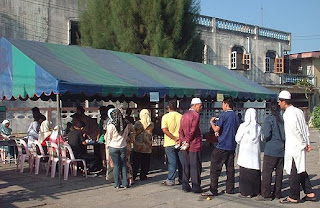 The 19th of August sees a huge vote in Thailand. The people will be voting on the new constitution drawn up by the military junta.
Without getting boring, on the whole it seems a good document, bringing it in to line with alot of western democracies. The vote however will be a straight race between the supporters of the military and the supporters of the ousted PM Thaksin. It'll be a close call!
The picture is from the last election in the south of the country. With all their extra terrorist problems I bet there will be more soldiers on duty there than voters.
Posted by BangkokRam at 9:17 am No comments:

As you can see my plans for world internet domination is gaining pace, up another million places in the last month in the Alexa standings.

Hopefully within the year HRH Google will come and buy me out for trillions of dollars! Obviously I wont except, I have some morals left. YEAH RIGHT!!!!!

So keep on reading the blog and adding to my numbers, spread the word folks.
Posted by BangkokRam at 9:42 pm No comments:

Match of the Day 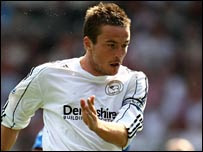 Derby Skipper Matt Oakley
Premier League new-boys Derby held their own against Portsmouth as both sides struggled with new-look line-ups.
With 10 debutants fielded, it was always likely the game may be scrappy but it started well as Derby's Matt Oakley volleyed in on five minutes.
Pompey drew level on 27 minutes when Benjani Mwaruwari's low shot slipped underneath goalkeeper Stephen Bywater.
John Utaka poked in to put Pompey ahead on 83 minutes but Andy Todd levelled with a diving header seconds later.

Also seeing Match of the Day again is a real treat, good ol' Gary, and the two Alans are easily the best pundit team on TV!

Well done Rams, another 95 points should see you win the Premiership.
Posted by BangkokRam at 12:46 pm No comments: 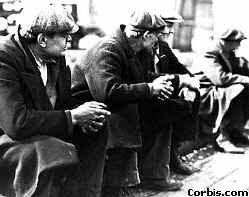 I found out the other day i'd lost my job, I found out today i'd been put on gardening leave for the rest of the notice period.
I don't know how to say I feel, gutted! is probably the best feeling, now I know how the guys at somewhere like Rover felt when they got the chop for something that wasn't anything of their doing.
My ex employer had his reasons, mostly financial, but there his problems, not ones to be discussed on the net. I think it will be the getting up and going to work routine that i'll miss. Luckily i've had worse than this in my life, so a blip like this wint get me down. Stuff like this this as to be risen above and life will go on.
Gives me more time to get on with watching Elizabeth grow.
I'll keep you informed about my job hunting stories. Anyone want my new mobile number, drop me an email. 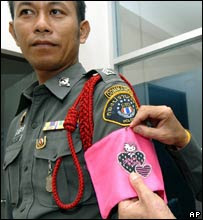 Police chiefs in the Thai capital, Bangkok, have come up with a new way of punishing officers who break the rules - an eye-catching Hello Kitty armband.
The armband is large, bright pink and has a Hello Kitty motif with two hearts embroidered on it.
From today, officers who are late, park in the wrong place or commit other minor transgressions will have to wear it for several days.
The armband is designed to shame the wearer, police officials said.
"This is to help build discipline. We should not let small offences go unnoticed," Police Colonel Pongpat Chayapan told Reuters news agency.
"Guilty officers will be made to wear the armbands in the office for a few days, with instructions not to disclose their offences. Let people guess what they have done," he said.
Further offences would be dealt with using a more traditional disciplinary panel, he said.
The cartoon character Hello Kitty was first introduced by Japanese company Sanrio in 1974.
The cute round-faced cat has become an Asia-wide marketing phenomenon, with Hello Kitty products such as stationery, hair accessories and kitchen appliances available across the region.

AFter the start of this valid crusade, the powers that be will start on the more important issues that face Thailand
Posted by BangkokRam at 9:36 pm No comments: 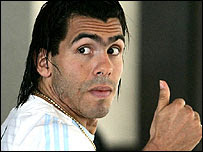 How much more can happen or be written about this man?
He caused the biggest ooh haa in the Premiership last season, and looks like he'll be news at the beginning of this season. Tevez was signed by West Ham at deaths door last season, but West Ham didn't own him, a third party sports mamangement compnay owned the sports rights. This is against the rules of the premiership, so West Ham just tore up the contract with the third party and so appeased the Premiership and were only given a fine, not deducted any points which would have sent them down to the 2nd division.
The ruling above consigned Sheffield Utd to the lower division, one which they contested. Well now Man Utd want to sign the Argy, but who do they buy from? Technically it as to be West Ham, but their torn up contract isn't as torn up as they hoped. All this is going to the High Court. If there is any justice, this wont be resolved before the transfer deadline and he as too wait for the Utd move, Tevez, through probaly no fault of his own as caused more problems in English football than any other player. Far from me to say anything, would you want this strange looking man in your football team?
Posted by BangkokRam at 11:36 am No comments: