Its that time of year when Belper Fair pays us its annual visit, This year Elizabeth was old enough to appreciate what was happening. She went on loads of rides and had a go at hook a Duck.


Check out the video below:

Posted by BangkokRam at 7:25 pm No comments: 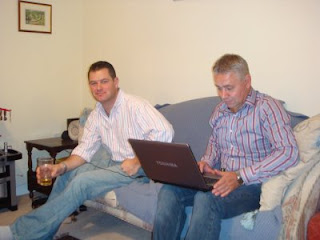 Later today, my cousin Darren Parker is coming over for a visit. He will be our first overnight
guest so looking forward to that. Later Ann and Andy will be coming over for a Thai dinner and then its off round Belper for a few pints.

Andy and Darren being sociable on Facebook
Nuch's Thai dinner was superb as usual, everyone enjoyed the meal, at around 10pm we moved out to Belper for a few jars, sadly the last week at work and the long day caught up with me! By 1am Darren and I were on our way home and left Ann and Andy to it. 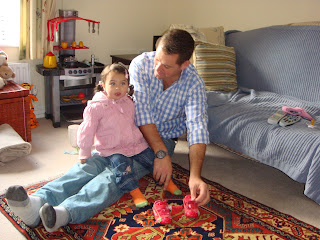 The photo below shows that Elizabeth has switched illigence to Darren, she loved him!!!!!

Cheers for the superb lunch Darren and come back soon.
Posted by BangkokRam at 8:45 pm No comments: 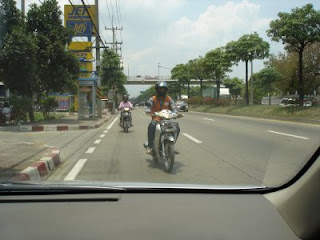 There are a whole load of differences between Thailand and the UK, with all the troubles going on in Thailand it has bought seceral closer to my mind.
Driving is a major difference, I know I've gone over it a million times but driving in Thailand id mental. The picture you can see a motorbike taxi coming towards me in my lane, this is common. When a Thai driver flashes you, it doesn't mean after you, it means get oit of the way i'm coming through and know one will stop me.
Politics in Thailand is altogther a different ketlle of fish, we have a few fanatics over here but on the whole we go with the flow and mess the goverment about at by elections. Thailand as many more fanatics, maybe because democracy is still pretty much new and is taken very seriously, even worth dieing for!

Posted by BangkokRam at 4:26 pm No comments:

I'm becoming more worried regarding the events that are unfolding in Thailand.

The on going political strife is causing the most arm, one group PAD is seriously under minding Thai goverment and with their anti democratic, dictatorship led policies, Thailand will be marginalised by the rest of the world should they ever get what they desire. I cant understand why the authorities are not cracking down on them.

The situation on the Thai-Cambodia is becoming more serious, Cambodia wont back down, that country as the biggest chip on its shoulders after what happened in their recent history. They resisted carpet bombong and a clandestine invasion by the US, so resisting Thailand will be a pip.

Current global finacial problems are slowly starting to hit Thailand, this will mean local difficulties and has the credit crunch grabs the rest of the world, fewer people will be able to visit the country and that will put a big dent in the coffers.

Also a worry is the lack of real news in Thailand, Nuch keeps in touch with the Thai news agencies. I recently showed her some pictures on the TIME website and she couldn't beleive the level of violence that is happening in the protests, and pictures of ten captured Thai troops in Cambodia shoecked her as the Thai news agency said it was a false report.

For the sake of all the people I know in Thailand, I hope things sort themselves out soon.
Posted by BangkokRam at 7:11 am No comments: 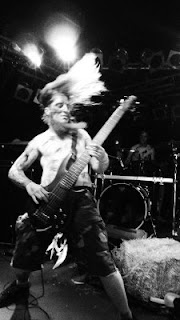 My cus Jim in OZ is something of a musician, he is into death metal and his brand as a slight twinge of nordic viking warlord!

Sounds a bit mental to me aswell, but then again I am twice his age and my music taste sort of stopped in the mid 90's.
His band "Claim the Throne" had its debut CD and book launch tonite in Perth, according to early reports it went superb, click on the link to listen to the band.
http://profile.myspace.com/index.cfm?fuseaction=user.viewprofile&friendID=26490079
Good luck Jim.
Posted by BangkokRam at 10:40 pm No comments: 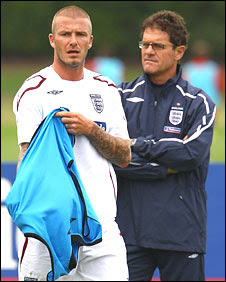 As of last night England sit top of their world cup qualifying table. Four wins out of four games!
New manager Capello must be doing something right, lets hope this carries on next year.
Posted by BangkokRam at 9:00 pm No comments: 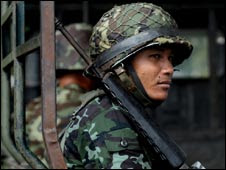 Today saw fighting between Thailand and Cambodia at the disputed Preah Vihear temple. The temple is on the border and has been disputed for decades. In the 60's the UN gave the temple to Cambodia, but the area around it was never decided.

Over the last few months, the Thai's and Cambodians have been ramping up the tension by moving in large scale armed forces. There was a skirmish last month which resulted in wounded on both sides. Today it erupted big time. Two Cambodians were killed and ten injured, the Thai's suffered ten wounded and had ten taken prisoner.
What worries me is that both countries don't like loosing face so will not back down, also both goverments could use this to divert attention from their respective problems. Also both sets of soldiers, particually the Khemar's are good fighters, the Thai's have some exceptional special forces and the Khemar's have kicked the US's as in the not to distance past so you'd think they'd cope with Thailand.
Lets hope everything sorts itself out.
Posted by BangkokRam at 8:39 pm No comments: 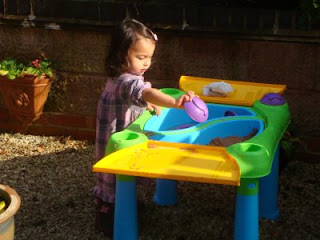 This picture is of Elizabeth playing in her new sand and water pit. She loves the outdoors and kick a proper fuss up when its time to come back in.
Posted by BangkokRam at 11:57 am No comments: 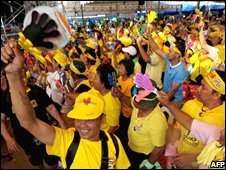 The following is from the BBC website, they say it better than me:
Protesters seeking to force the Thai government to resign say they will continue their demonstrations, a day after violent clashes in Bangkok.
The People's Alliance for Democracy (PAD) has accused the government of having blood on its hands, a day after two people died in violent protests. More than 400 people were injured in the clashes. The streets around parliament were quiet overnight after the military deployed unarmed troops to help police. The demonstrators were attempting to disrupt the inauguration of the new government, which they claim is being run by proxies of the ousted prime minister, Thaksin Shinawatra.
The protesters barricaded the building and trapped lawmakers inside for several hours as police outside fired volleys of tear gas in the crowds to try to clear the area.
The new prime minister, Somchai Wongsawat - who has refused to quit - was forced to climb over a fence to escape. Mr Somchai, who is Mr Thaksin's brother-in-law, has sought to calm fears of further unrest, telling foreign ambassadors that the government will "resolve the domestic problems through the democratic process", the Agence France Presse news agency reported.
I'm still struggling to understand PAD, they are intent on messing Thailand up. Seriously, they want to take the vote off the common people, because they are not clever enough to use their vote. WTF!!!!
Thats like UKIP saying northerners cant have a vote because they wont use it properly (not vote for them).
Posted by BangkokRam at 8:51 pm No comments: 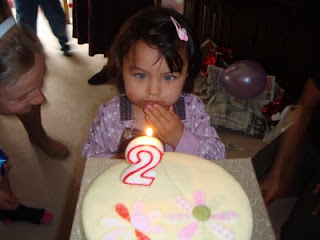 Last year Elizabeth was a little too young to appreciate her first birthday, even this year she wasn't sure what was going on, but in Elizabeth style she just went with the flow and really enjoyed herself.
I did the english food and Nuch made some excellent Thai food that went down very well. Altogether there were a dozen kids and even more adults. I hope everybody enjoyed themselves. I did, even though it was very hard work.
Posted by BangkokRam at 8:05 pm No comments: