For the first time in a long time I was looking forward to New Years Eve, it meant somnething and i'm looking forward to 2008..
Oui came round for a bit of a DO!, Nuch cooked up some lovely Thai dishes and they alked the night away as only two Thai birds together can.
We watched the New Year in on the BBC, the firework display down in London was amazing, however this was over shadowed by the news of 30 people injured in a blast in Thailand.
Posted by BangkokRam at 10:44 am No comments: 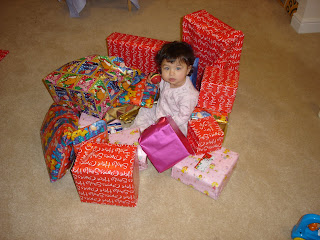 Im not sure who was more excited, me or Elizabeth?
As you can see from the picture, she had far too many presents for someone who doesn't even believe in christianity. She still wasn't quite able to open her own presents needing a little help from Nuch and I. 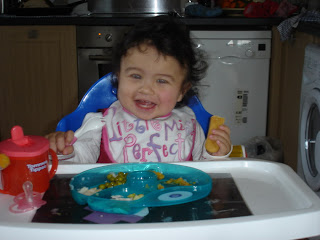 fter a quick visit to my Mum's I set about cooking Christmas dinner, Nuch's friend Oui was coming over for dinner. I can honestly say now it was a good dinner, cooked to perfection and all ready at the same time. Elizabeth had everything we had and she tucked in with gusto.

Oui ended up staying quite late, which was good for Nuch, she also took a family picture which is very unusual, we only have a few of us all together. Well that might be Christmas done for another year, but it was a good one and now Nuch as experienced an english Christmas. 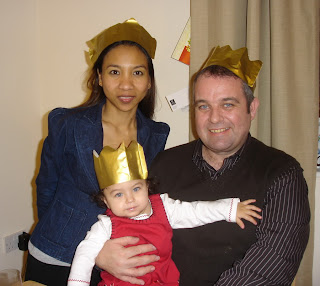 Posted by BangkokRam at 10:21 am No comments: 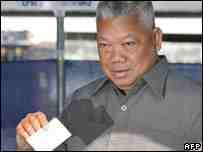 Yesterday saw the big election in Thailand. The first since the illegal over throwing of the democatic elected goverment last september.

The Army had hoped that their man from the Democratic Party was a shoe in, he is even more slimy than Tony Blair and David Cameron put together. The middle class where so happy with the Coup, even though it made Thailand the laughing stock of the world. Now the chickens are home to roost, the piblic and in particular the rural community have had a chance to speak. They voted squarely to support the PPP, a party born of Thaksin Shinawatra TRT party. Thaksin will be laughing himself silly at the result. PPP got 232 out of 480 seats, not a majority, but with several of the smaller parties being ex Thaksin chums, it seems the PPP willform the next goverment.

In short this could be a terbulant time for Thailand, but providing the Army except the result then only good will come from it.
Posted by BangkokRam at 8:41 am No comments: 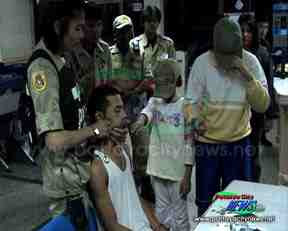 The above photo is from a news story by Pattaya City News , a sicko 25 year old , pissed up. Broke into a neighbours apartment and tried to rape her 10 year old daughter.
You can see the girl and Mother identifying him. The copper holding his head is a fair indication of the treatment that wil be meated out to him when out of camara. Phew, not good!
A court day is to be set, he as already admitted his guilt.
Sickko!!!!
Posted by BangkokRam at 9:08 am No comments:

Christmas back in the UK 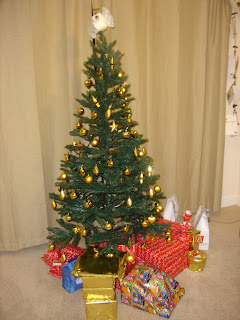 Too be fair, christmas last year wasn't the best I had. Nuch was at work, couldn't get a christmas dinner for love or money and Elizabeth was to young to understand what is going on. 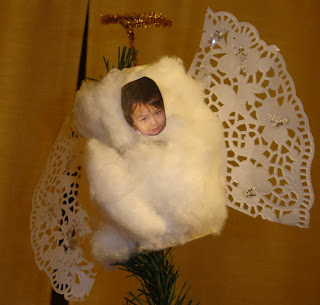 This year will be different, Elizabeth is older, but still not aware of what is going on. She made the fairy on the top of tree at nursery and is being her usual Angel self. Obviously, Elizabeth being Buddhist wont have any bearings on the good time we hope to have.
She as left the presents and christmas tree alone, i'm sure on christmas day she'll be more interested in the paper rather than the present. We have bought her a proper doll, it is a pig ugly brute, looks more like Chucky.
Anyway got to go, got the last of Nuch's present to finish wrapping.
Posted by BangkokRam at 7:36 pm No comments:

I shall no longer be blogging about Derby County until they are out of the bottom three, so I doubt you'll here about them here till the start of next season.
Posted by BangkokRam at 3:11 pm No comments:

Saturday saw a 2-1/2 hour marathon around ASDA! Not the plesent trip Julie Walters will have you believe, but an all out battle to get round without becoming a victim to shopping rage.
As you can see from the picture above, i'm directing Nuch in a flanking formation towards the Turkey crowns. The operation was successful with only a huge dent in the wallet as damage.
Hopefully thats it now. Anyone who hasn't done their main christmas shop, God help you!!!
Posted by BangkokRam at 3:23 pm No comments: 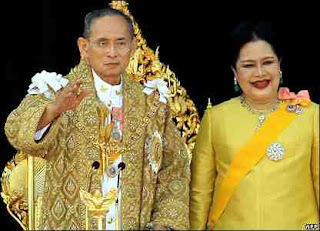 Not much can bring the life of the noisy, traffic-clogged heart of Bangkok to a halt.
But on Wednesday the streets were hushed, the cars and buses banished.
All you could hear were speakers playing the royal anthem, and thousands of flags fluttering in the breeze, held by people of all ages.
Most were dressed in yellow and had waited for hours for a glimpse of a stiff and stern-faced old man passing in a motorcade, on his way to the gilded halls and temples of Bangkok's Grand Palace.
And as it passed they shouted "Song Phra Charoen", "Long Live Your Majesty". Some had tears in their eyes.
What explains this extraordinary bond between people and monarch?
King Bhumibol Adulyadej is accorded an almost divine reverence, with titles like Phra Chao Yu Hua (Lord Upon our Heads) or Chao Chiwit (Lord of Life).
People prostrate themselves on the ground in his presence. Yet there is genuine affection too, and it goes both ways.
Thais talk of their love for him as though he were a cherished member of the family.
In his speeches to the nation he likes to joke and tease them. 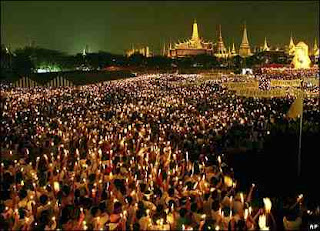 Earlier in his reign when he was younger and travelled a lot, he clearly enjoyed meeting and mixing with people from the poorest rural communities.
People often refer to his long life of service to the nation, to his experiments with agriculture and irrigation, many of them carried out on the grounds of his palace in Bangkok.
The formidable public relations machine which manages the monarchy's image makes much of these experiments, as it does of the king's other talents as a jazz musician and sailor.
But the real measure of these achievements is impossible to know in a country where all criticism of the monarchy is curtailed by the draconian lese majeste law (offence against the dignity of the monarch), and only lavish praise for the royal family can be published.
The reverence for the king seems rooted in something less worldly.
Time after time when Thais are asked about the virtues of King Bhumibol they refer to his proper adherence to the principles of "Dhamma", Buddhist teachings and the Buddhist concept of righteousness.
It is not just his practical deeds they are looking at, but his manner; his modesty, his reserve, his gentleness, and his apparent detachment from the world - qualities he has worked hard to perfect and project.
He is as much a spiritual leader as a worldly one.
Even though he isn't my King, I do wish him all the best.
Posted by BangkokRam at 10:19 am No comments:

The last place just wasn't working out, a totally unachievable target, not the support I was promised and a sales efos that conflicted with mine,

So its on to pastures new as a Contracts Manager for a good friend, hopefully never a dull day, a super package and christmas off work for the first time.
Posted by BangkokRam at 8:13 pm No comments: 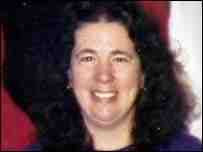 The phrase "Beggars belief" doesn't start to explain the situation a 54yr old Brit as found herself in whilst teaching in Sudan.
Gillian Gibbons, a respected teacher from Liverpool was teaching a primary class in Sudan and asked the children to name the teddy. The most popular name was "Muhammad". Fairly ordinary. Unfortunately not in one of several backward Muslim countries around the world. After being grassed up by a fellow teacher she as recieved 15 days in a hell hole prison, serving time with hardened criminals like adultrers and woman who have accused the wrong man of rape.
The UK goverment as protested strongly, great!
I would put an immrdiate freeze on any Sudanese person entering the UK, Do spot checks on all Sudanese immigrants. Should there be any infringement of their visa, they're back to Sudan on the first plane.
I'm sick of these wacko states spouting Islam as the law. I feel sorry for the so called normal muslims who are labelled with the same tag. But they need to start having a go at these states rather than calling UK citizens for negative Islam views.
Posted by BangkokRam at 9:14 am No comments: