Just when you thought that moral outrage as hit Def Con 5, along comes the new Nok Air calendar. Following on from the very recent Saturday Night Live Sketch showing a spoof of a Rosetta Stone video for sex tourists this is too much for some in Thailand.

Nok Air is the Easy Jet of Thailand, being owned and run by Thai Airways. Their new calendar as raised many eyebrows! Showing scantily clad ladies with several of their aircraft.

Prisana Pongtatpitakkul, the Ministry of Culture's Permanent Secretary is throwing a fit, explaining that this calendar is an afront to womens dignity. I believe, this is something else that certain people are trying in vain to dictate what Thailands image is oversea's. They may be able to censor the press and public at large in Thailand, but not what people think overseas.

Also at the end of the day, it is only a calendar. When I usd to visit some of my previous engineering clients, the calendars on the wall were far, far worse. Some even made me blush! This is just a marketing calendar and in all fairness, all of this publicity is antastic marketing for Nok Air.

(Does anyone know where I can get one please?) 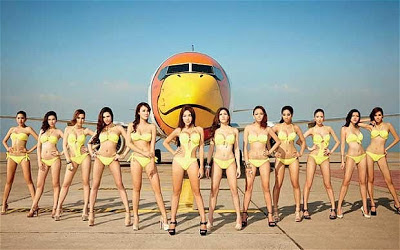 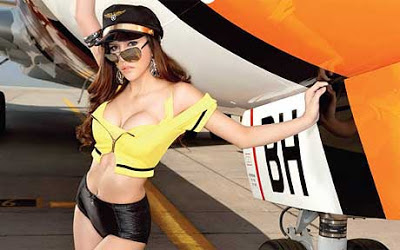 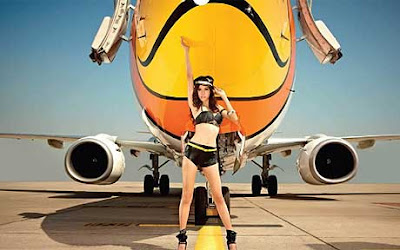 Posted by BangkokRam at 9:39 pm No comments:

This week In Thailand the main news as been the reaction to a YouTube video released by the US comedy program, Saturday Night Live.

The sketch is basically a parody of a Rosetta Stone advert. Rosetta Stone being a language software company that teaches people to learn the worlds languages.

In the sketch, there are several geeky looking American white males learning phrases that will help them on holiday in Thailand. Phrases such as "How much for short time?" You get the picture.

It is a funny sketch, one that pose fun at the American bloke going to Thailand for sex. Unfortunately, certain members of the Thai government have taken exception and are very angry that this video will tarnish Thailands image. What!

The image of Thailand that I believe most people have is one of it being a world player in the sex industry, although as a normal tourist, you probably won't see to much of it, it is out there and in certain parts is very much in your face. Also, for every bit of prostitution you see as a tourist far more goes on for the local Thai population. Anyway, the cultural minister as summoned the US Ambassador to give he a talking too and they have tried to get the video clip banned on YouTube.

Banning and censorship seem to be a Thai pastime at the moment, being as they just came 135th in the world league table for the freedom of the press.....

Anyway, below is a link to the video clip. Make your own mind up.


- Posted using BlogPress from my iPad
Posted by BangkokRam at 6:58 pm No comments:

Every time we have an upcoming trip back to Thailand I begin to monitor the value of the Thai baht against GB pound.

I always go back to 2005 when a pound was worth 75 baht, now it's around 48 baht. That's a 40% difference, which is again not a good situation. I tend to equate things like this to beer. Beer used to cost around a pound a pint, bearing in mind that prices have gone up with time and that same pint with inflation and the exchange rate is around £ 1.80. That's some increase...

The trick is to book any Hotels and Car Hire in pounds, providing the baht strengthen and the pound weakens then this is a safe bet.

This said we are still booking five star hotels for £80 a night and hiring a very smart SUV for only £32 a day, so Thailand is still a good value place to visit.

More on our trip later...


- Posted using BlogPress from my iPad
Posted by BangkokRam at 4:38 pm No comments: