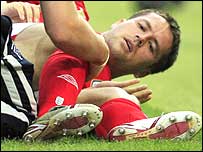 The usual Anglo-Nordic encounter. With so many of the Swedish players playing or played in the Premiership, it was always going to be a bitter contest.

Owen early injury was horrific; I felt my knee twinge every time I saw the replay. Newcastle will be well pleased.

Joe Cole’s goal was a belter, as in all fairness was the England performance.

The biggest exception was the defence, this defence is supposed to be the envy of all international coaches; they looked very ordinary and had no venom. They have got to do better.

Anyway, it was more or less the result we wanted. Bring on the Ecuadorians.
Posted by BangkokRam at 8:28 am