This weekend as seen huge celebrations all over Thailand. The occasion being the Diamond Jubilee of the King.

The King of Thailand is the longest ruling monarch in the world, it is amazing the respect and love the Thai people have for their royal family. They do stay in the background; they don’t have ex Fleet Street Spin Doctor’s telling what would be best for their public image.

When the King does speak, people listen! Recently he told the two opposing sides of a political problem that as plagued Thailand all year to sort the problem out. Next day they began to get things together.

In Thailand it is illegal to defame or ridicule the King, no spitting image dolls or tabloids running round making Mercedes cars crash in Paris Tunnels. The flip side is that the Thai royal family don’t give them cause to anyway; the worst thing that as happened in the past is the Crown Prince got a divorce.

The King is very well known for his environmental projects all over Thailand, he used to direct most of the projects himself, and he is also an accomplished musician, writing the King’s Song, which always heralds his arrival.

Unfortunately, this last week as been torture if you are a non Thai. The TV coverage as been 100%, all the Thai Station’s showing exactly the same thing with the same commentary. Worst of all, I missed the first twenty minutes of the England Paraguay match for yet another re-run of the days proceedings.

Generally he seems a pretty cool guy, a lesson maybe our royal family should take.

The second picture is a very famous one, showing the King talking to an old woman, it captures what the King is all about. 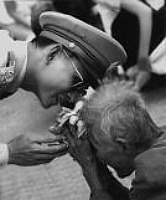 Posted by BangkokRam at 3:51 am

Email ThisBlogThis!Share to TwitterShare to FacebookShare to Pinterest
Labels: News