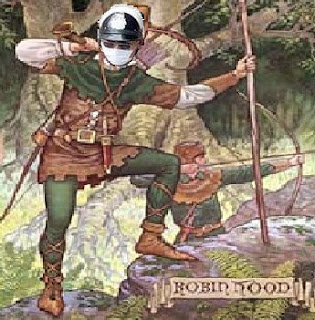 Thailand prides itself on its latter day Robin Hood. The brave boys in brown who gallantly stayed home during the Military Coup so as not to cause any trouble.

The only real difference between the UK Robin Hood and the Thai version; Thai Robin Hood steals and extorts off the poor to keep himself. I write this post because yet again I got stopped today on the Expressway for speeding, I usually have too pay a 500bht bribe and off I go. It’s gone up in recent months, because of the lost revenue during the coup.

The worst part is I new there was a speed trap so I was only doing 70kph, stayed behind a bus so I couldn’t even be zapped. I get to the Toll Station and get pulled. Luckily the copper had a good command of English, so when I was told I was going 110kph I was surprised, he was even more surprised when I told him I wasn’t and asked to see the data!

I have been warned not to provoke the feds, they can put you up in the Bangkok Hilton on a whim, and this time I had had enough. If the money went into the coffers of Thailand then fair enough, all this money goes in the kitty for divies later.

After he thought about and then used Elizabeth as an excuse he sent me on my way. These guys never stop the rich merc drivers, because they probably know their boss or will kick up a fuss. The poor pick up driver or scooter rider is the usual target.

Everyone in Bangkok knows this goes off but does nothing about it! Why?
Posted by BangkokRam at 1:31 am