Since January 1st I’ve decided to do something about my diabetes this year, it’s been 10 years since being diagnosed. In that time I’ve had a couple of go’s at trying to help myself, but I’ve generally relied on the medication I take and watching semi closely what I eat to control my diabetes.
I read a report on the UK diabetes web site about going low carb and how this doesn’t have to be an horrendous diet.
So I tried it, they recommend having under 130g of carbs per day plus some exercise to begin to control your diabetes. Obviously, I took no notice no notice and have been eating between 60-80g of carbs per day, one day I only managed 30g. Looking back now, I went to far..

What I ate since then as generally been very good, I cut out all bread, rice, pasta, alcohol and some fruit and veg. I was amazed at some of the things I had included bacon, plenty of chicken and fish, more of certain veg than ever and some things like yogurt which full fat was better than low fat due to carbs in them.

Breakfast was usually porridge, which is high in carbs but is an excellent slow release energy food, mixed with raspberries and strawberries and an amazing zero maple syrup from Skinny Foods.

Lunch as been a real issue, working on the road I eventually stopped with sandwich meal deals and got on tins of tuna, chicken pieces, zero jelly and zero soft drinks.

Dinner was the highlight of the day, steak, tuna steak, chicken, prawns with veg and occasional potato. Better than I’ve ever eaten. 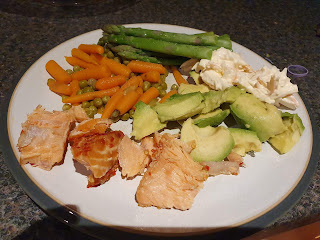 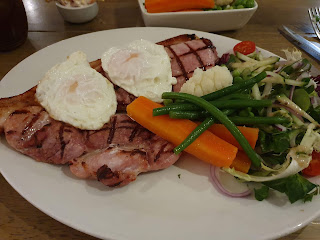 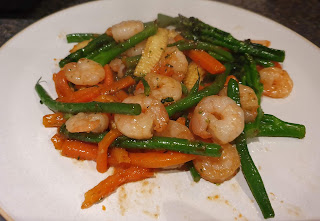 I’ve produced a plus and minus of the experience.

Minus -
Missed all the nice, but unhealthy foods especially chocolate and cake
Missed beer
No energy, a real issue
First two weeks, felt very unwell.
No exercise due to low energy
Limited in restaurant
Spending a fortune on new cloths

I was going until the end of January, but my body is sort of used to everything now and I’m sort of carrying on at least until I get my results of my diabetes check in a few weeks. Maybe not as crazy but I’ve still not had any chocolate and despite finishing dry January I’ve only drinking about 10% of usual weekly alcohol. I’ve not eaten bread, pasta or cake either. Trust me I really want to but I just look at the carb total and put them back.

I’ll let you know the results of my check up and also the effect of adding exercise to the regime this week.
Posted by BangkokRam at 11:21 am